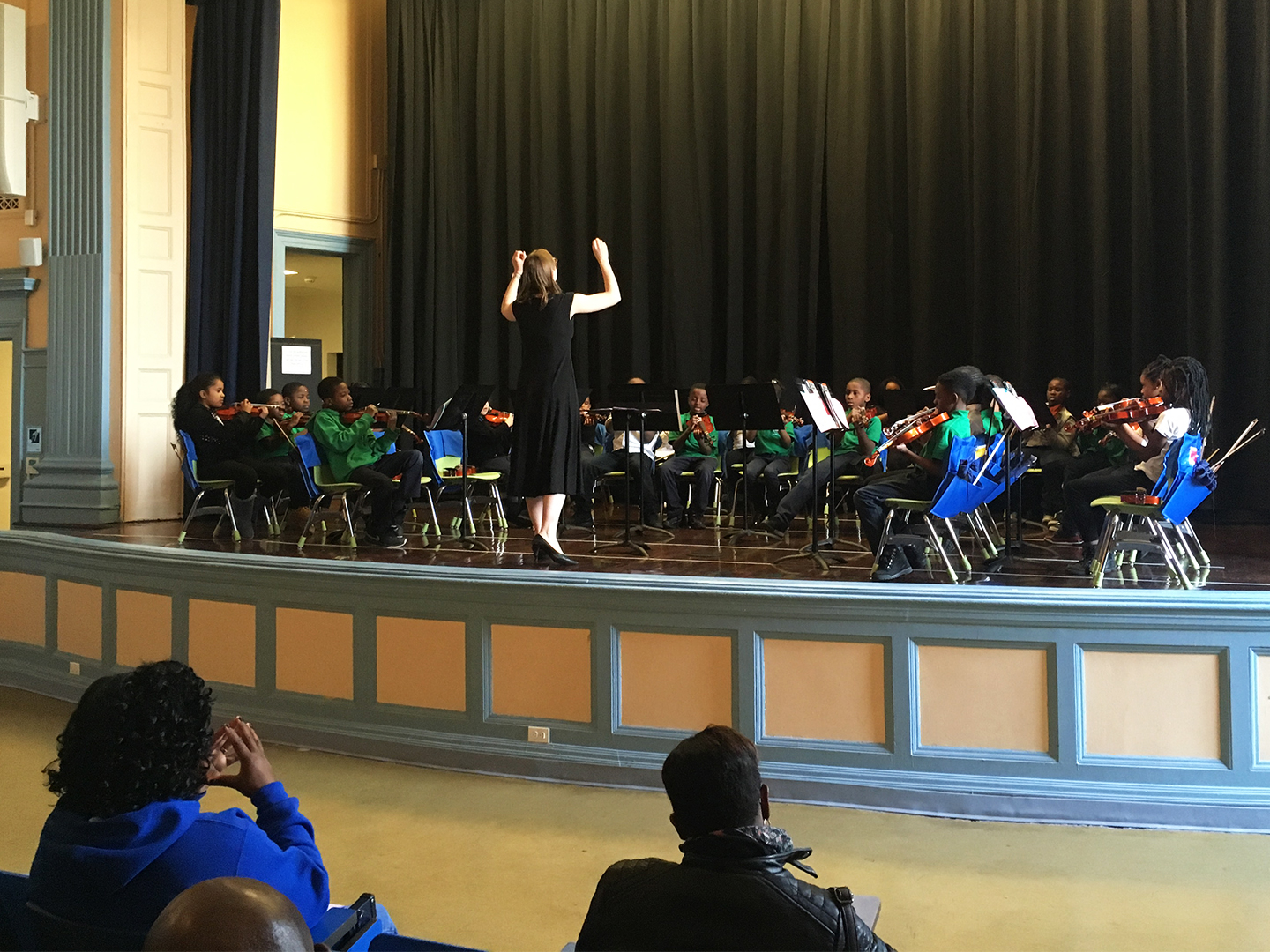 Second and third graders, violins in hand, silently walk into the auditorium and take their seats. Katy Brodhead, the music teacher at KIPP THRIVE Academy, walks around the stage checking to make sure students have followed directions to put their bows away in the seat pocket behind them.

Each time a class comes out to play, two students introduce the original compositions they’ve written and let parents know which class they are in. Their parents, phones in hand, congregate in front and smile while they record everything their kids say and do on the stage.

As the second and third graders get ready to play, Brodhead directs them through a well-rehearsed, step-by-step chant to make sure their violins and fingers are in the right starting position.

“Make sure you’re on A, because this song starts on A” Brodhead reminds her performers.

Four years ago, the arts program at KIPP THRIVE Academy – like the rest of the school – was just starting. Brodhead was a founding music and social studies teacher for the school’s 105 kindergarteners. Like most of kindergarten, the music class focused on basic skills: how to read their first note, how to sing in a controlled voice, and how to listen and match pitch.

Over the next two years, Brodhead added new parts of music class as the school got bigger. “As our kids get older and master some of the foundational stuff, we’ve been able to add on so many more experiences for them in music.”

In first grade, kids started learning to play the xylophone. In second grade, they took on violins. And in third grade, kids added recorders (you remember recorders, right?) to the violins in their first symphonic adventure.

Looking forward to next year, when KIPP THRIVE will reach it’s full K-4 size, Brodhead plans on bringing in band instruments, letting kids sign up for horns, percussion, and woodwinds. She also plans to add a more robust afterschool program so that kids get more time to practice.

The power of a network

In 2014, KIPP New Jersey held its first “Arts Day” performance. The three KIPP elementary schools at the time who all had music programs brought all of their students together at KIPP Seek Academy, which has a large auditorium. Kids got to see each other perform, and applaud for each other as a community.

They repeated the process in 2015, this time with KIPP Life Academy, which also hired a music teacher in year one. Coming into this year, the art teachers had an epiphany.

“When we sat down and thought about it, we realized we had arts across most of our campuses now”, Brodhead said. All of the elementary schools had music. Several had dance or art classes. The high school has visual and performing arts (dance and drama) and the new campuses in Camden had arts classes.

And arts at other campuses are helping students learn who they are and express themselves. Seek’s music teacher, said: “Every year Jewel has become more and more confident and now, as a 2nd grader, even though she is still one of the quietest voices in class her confidence has grown so much. She eagerly raises her hand to participate now and she has even started taking violin lessons!”

“Overall, things are happening at a really high level in a lot of the arts classes, so we wanted to make our mini-day performance larger, and really showcase what our kids are doing,” Brodhead added. Out of that, the arts departments across eight KIPP NJ campuses put together a proposal for Arts Night and opened it up to community members, families and anyone else interested.

Part of their goal is to change the perception that charter schools are test prep factories that don’t offer well-rounded educations. Brodhead said, “We’re opening this up to families so they can see what’s possible. We want to show them that we do offer the arts, and it’s a big opportunity for families.”

Their other goal is to showcase what’s going on in arts education across all KIPP NJ schools, so students and parents understand their school isn’t doing this in isolation. There is a whole community of artists at work within KIPP. They’re putting a program together that includes performing arts in the form of band instruments, choral performances, and dance performances from across KIPP NJ’s schools.

Out of this the network wide “KIPP New Jersey Arts Night” was born. On April 29th, the second and third graders – violins in hand – will be part of a much larger performance at Essex County College’s auditorium. Students from elementary, middle and high school campuses will showcase what they learned through arts programs across KIPP NJ schools. Their parents, teachers and community will witness how far they and their classmates across KIPP New Jersey have come.

There are a limited number of seats still available for Arts Night. For more information and to RSVP, contact Jenn Shetsen.