“The Little Engine That Could:” KIPP Newark Scholar-Athletes Make Their Mark on Essex County

When KIPP Newark Collegiate Academy’s Assistant Dean, Mr. Jackie Finch started at the high school nine years ago, he knew the athletics program—which consisted of mostly loosely organized clubs—needed to change. The only teams the school had were boys and girls basketball. A track and field club ran one event per year. Students who wanted to play football did so in partnership with another Newark charter school—and the KIPP NCA Panthers lacked a field.

But over the last nine years, that’s changed. “Today, we have over 250 students involved in our athletics program. We went from one team to 13,” said Finch. The Panthers’ athletics program started a formal varsity football team, replaced a soccer club with a team, and did the same for girls’ volleyball. Over the years, NCA added wrestling and cheerleading teams.

Even after these changes, the hard work was just beginning. “I always said we were the little engine that could,” said Jackie. “We always were a little behind the other schools. It took us years to build up to where we are now,” he added.

Their hard work has paid off. This year, Panther Athletics took its accomplishments to new heights. Varsity football has more student participation than at any time in KIPP NCA history, with around 80 athletes. Girls volleyball completed their most successful season, even winning 17 games and qualifying for the Essex County and State Tournaments. The varsity cheerleaders won their second consecutive Essex County Tournament Championship. Boys Varsity Basketball won KIPP NCA’s first ever division championship and qualified for the NJSIAA State Tournament. Athletes from KIPP Newark Lab Academy, KIPP Newark’s newest high school, currently compete as Panther athletes for select sports. The list goes on.

But Finch says the score boards—win or lose— don’t always show the real triumphs, including the positive reputation the program has earned in the Essex County athletics community—and the power of athletics to propel students towards academic success and career goals.

The Panthers host an annual Holiday Basketball Tournament, which has grown from four schools to twenty over the past 8 years. Finch says his goal for the tournament has always been to ensure participants are safe and feel welcome at the event. “The best compliment is when other programs ask ‘how do you get all these teams to come’?” he said. This year at the Panthers’ annual Senior Athletic Night, the Panthers recognized seniors at Cedar Grove High School. “They were really moved by that—that we would recognize their seniors at an event celebrating our own,” said Finch.

But in order to win on the field, the wrestling mat, or the volleyball court, students have to give it their all in the classroom. After a shaky academic performance one year, a student who wanted to play basketball the following year was told by Finch that his GPA wasn’t as high as it needed to be. The student begged Finch to play but was told it wasn’t possible.

“This year, he came in and said he would do whatever he needed to do. He finished the first marking period with a 3.9 GPA and told me that if I hadn’t laid down the law with basketball, he may never have realized what he was capable of academically,” said Finch. “Those are the moments where we know athletics can work hand-in-hand with academics to support student success,” he added.

Senior track and field shot putter R’Kaiya Bobien also struggled to find her balance as an athlete and scholar, particularly during her sophomore year. “I was slacking off a bit because I was so focused on track—and then I realized I was in jeopardy of losing my eligibility to play. I knew I couldn’t mess around if I wanted to go to college—and there was a lot of interest from college coaches. I turned it around and brought my GPA up to a 3.4. Today, I come home after practice, I shower, I eat, I do my homework, go straight to bed—and do it all again the next day,” said Bobien.

Her hard work and consistent routine paid off: On March 9th, Bobien became the first female student at KIPP NCA to have an official Athletic Signing Day. She plans to attend Shenandoah College on an academic scholarship in the fall and study athletic training and Spanish.

Female wrestler Goodness Okoro is another athlete who made history this year, as the first wrestler from KIPP NCA to ever represent the school at the New Jersey State Wrestling Championship—where she finished in fourth place. “I like wrestling because it’s a bunch of unique people coming together for the sport. There’s a huge sense of family. To be successful you need practice and determination. You can’t just go out with no sense of push for yourself. You might not win a match, but you have to keep on going to the next one,” said Okoro, a junior. What does her future as a wrestler look like? “Possibly the Olympics,” she says. “I’ll see how that plays out.”

This year, junior Tahjir Wapples was a member of the Varsity basketball team that won the Super Essex Conference Freedom Division Title—the first division title in school history. Like Bobien, basketball has laid the foundations of a future career for Wapples, who wants to study physical therapy in college. “As a basketball player, I can relate to the kind of pain athletes can feel—and I’d like to help relieve that pain for other people,” said Wapples.

Regardless of their future plans Wapples, Okoro, and Bobien all spoke about feeling transported when they play. “I love basketball because it clears my mind,” said Wapples. “Whether I’m angry, sad, or happy—when I touch that ball, my head is clear,” he added. 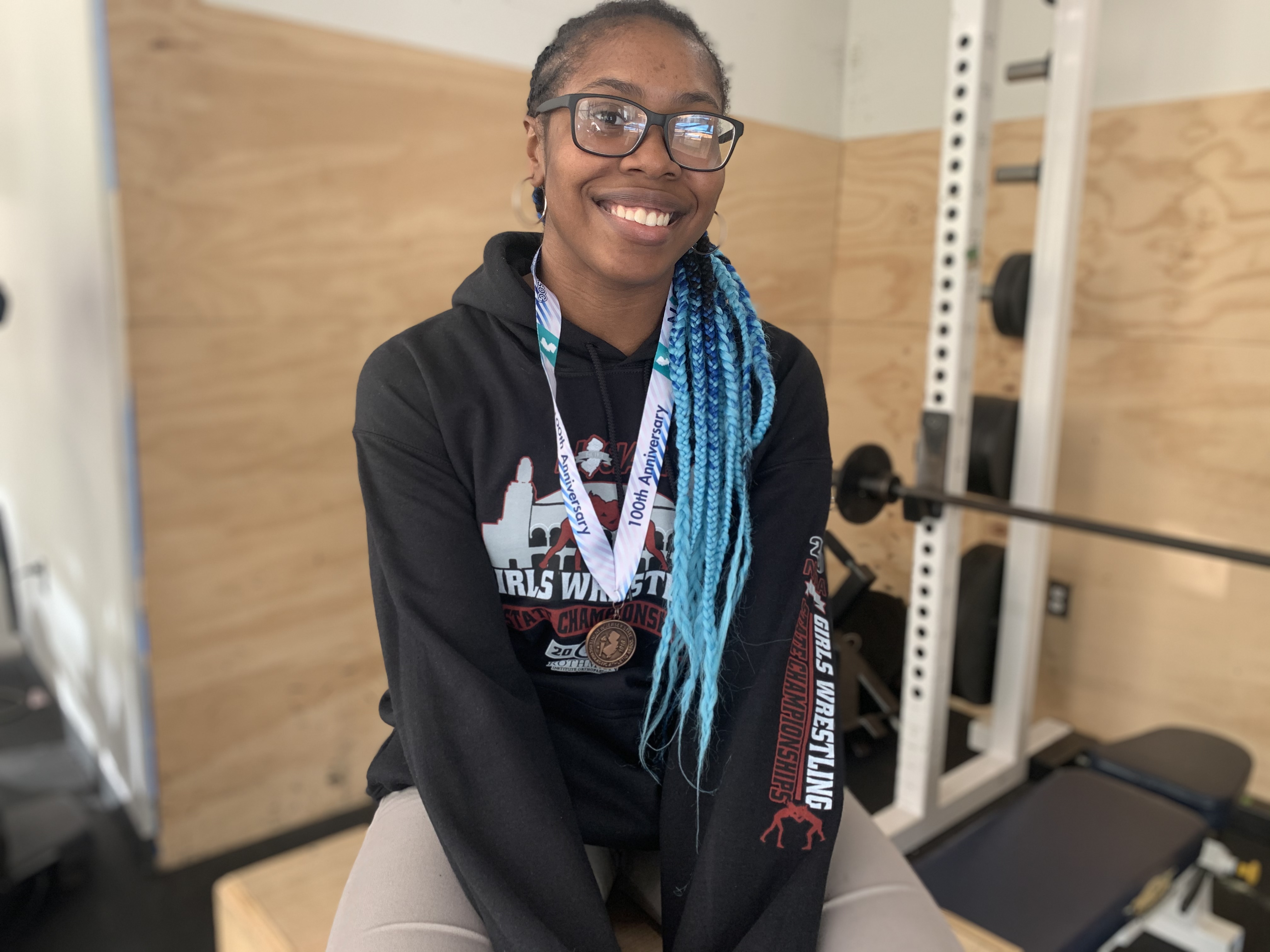 This year, athlete Goodness Okoro made history as the first wrestler from KIPP NCA to ever represent the school at the New Jersey State Wrestling Championship—where she finished in fourth place. 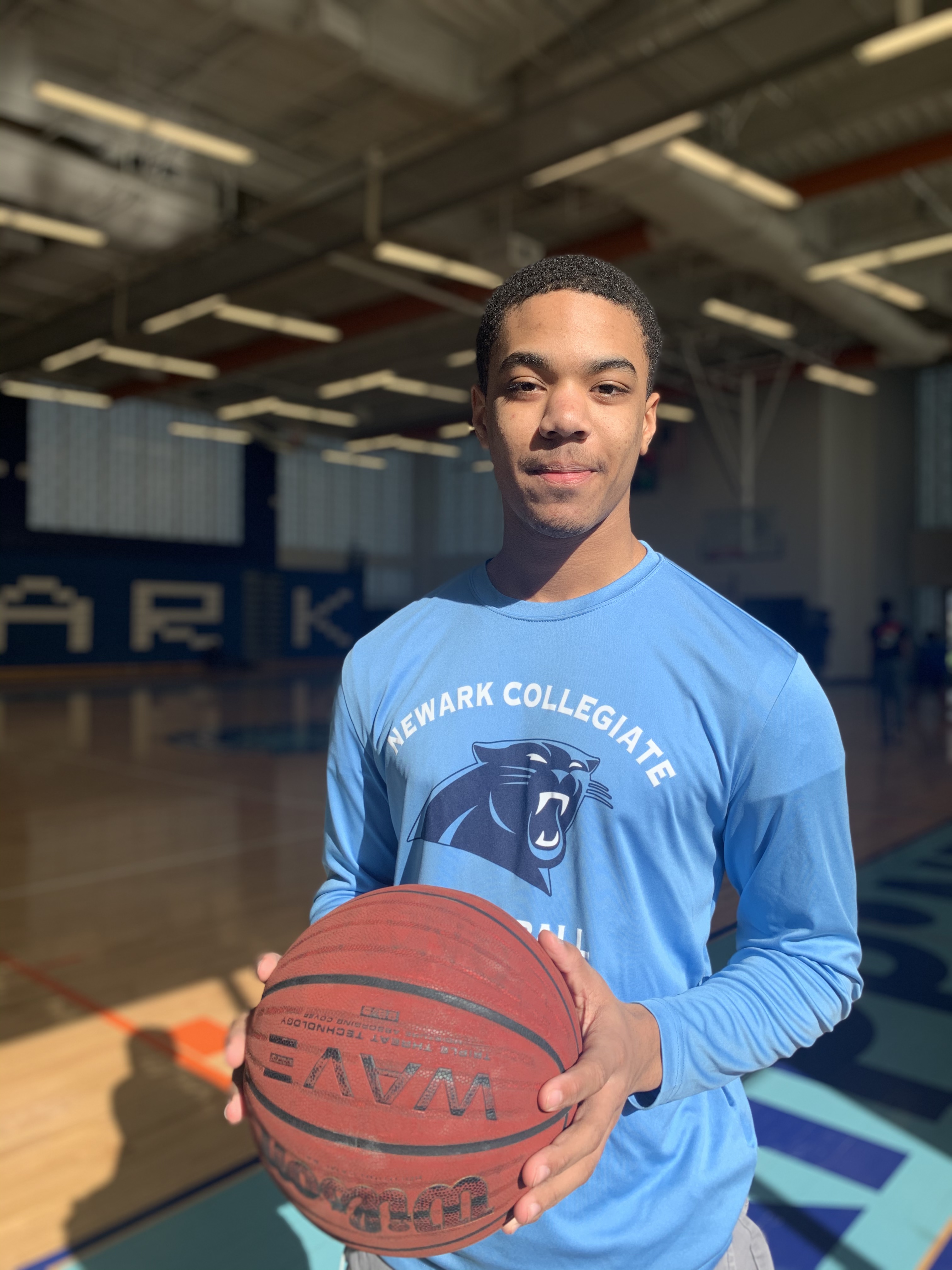 KIPP NCA junior Tahjir Wapples was a member of the Varsity basketball team that won the Super Essex Conference Freedom Division Title and hopes to study physical therapy in college.