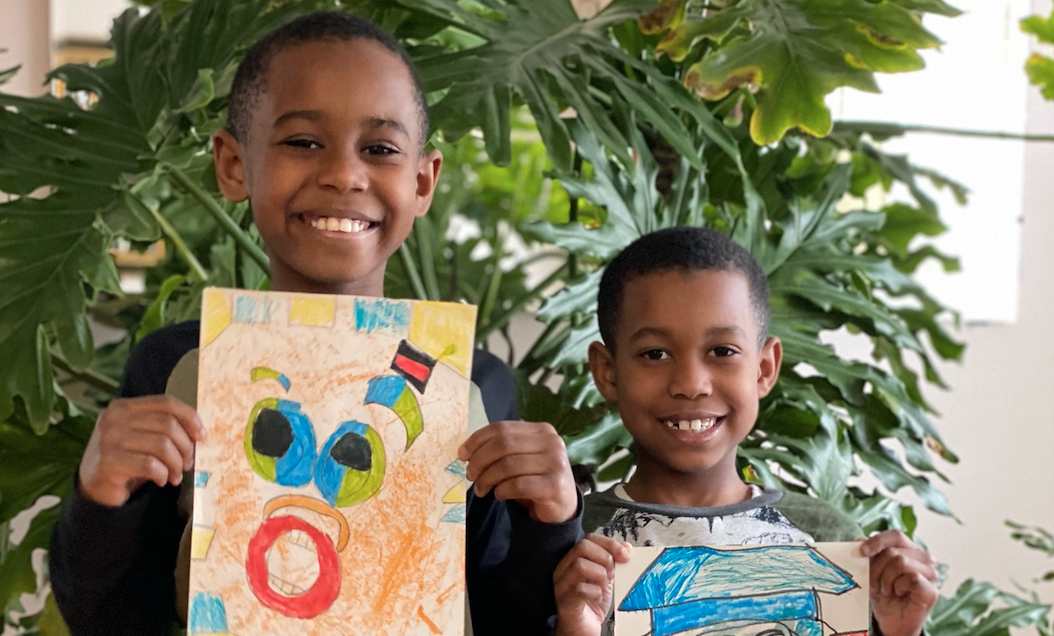 “We knew we wanted to keep SLIDE going virtually,” said McGee. “I remember being a freshman and how hard it was to connect with people in a new school. Starting high school virtually this year is even harder,” she said. That’s why this year, McGee and SLIDE members are leading a mentorship initiative that pairs seniors with freshmen, offering them a chance to learn from one another. For McGee, the mentorship program is a way to give back to a club that helped her find her voice as a sophomore. “When I was a freshman, I was the student who knew the answer but didn’t always raise my hand. SLIDE helped me find my voice,” she said.

The Male Mentoring group at KIPP Rise Academy has also kept meeting during virtual learning. Antwann Brown and Jeffrey Austin lead the club, which focuses on empowering young men. Each session covers a different topic, from leadership skills to  conversations about racial equity. “Recently, we were talking about the importance of showing up for every opportunity,” said Brown. “We want them to understand that you never know what opportunities you might miss if you’re not on time and committed,” he added.

The club completed a service project in March, donating clothes to the Newark community. “I think the clothing drive was important because most of my friends have clothing and shelter, but not everyone does, especially in the cold weather,” said seventh grader Bashir Moss. “We came together as a club and donated lots of clothing to the Salvation Army,” he added. Moss looks forward to next year, when the club will likely be able to gather in person again.

Students also kept connected through arts-based programs. KIPP Rise Academy Performing Arts teacher Asha Lindsey realized students had fewer outlets to express themselves during the pandemic—and she saw an opportunity to keep students engaged through music, dance, and acting. That realization resulted in a virtual production of The WIZ, with the script revised by Lindsey and the songs written by her students to reflect themes of the pandemic. In this version of The WIZ, Dorrien (played by a male student) is trying to get back to his (virtual) homeroom—he’s moved from Zoom classrooms, Youtube channels, and even Minecraft because of the coding genius of a fellow classmate, Evie, the musical’s villain.

As her thirty students rehearsed for the musical, they used apps like Flipgrid to record themselves singing, and practiced scales together over Zoom at rehearsals that took place two to three days a week. “The unexpected benefit of rehearsing virtually is that students are becoming screen actors, not just stage actors,” said Lindsey. But mostly, she said she wants her young performers to have something they can take ownership of during the pandemic. Their musical will be unveiled at the end of the school year and likely feature a virtual red carpet walk!

At KIPP Lanning Square Primary, art teacher Michelle Jones has helped students stay connected to the visual arts through remote and asynchronous art classes. This year, as students quarantined, Jones took them on a virtual trip around the world. “We’ve studied art from Kazakhstan to Egypt,” said Jones.

Eric Richardson’s two sons, Brennan and Noah, take Jones’ art class. “The boys love art. When we can’t gather together in-person, art brings everyone together,” said Richardson. Noah applied his art skills recently when he created a Black History Month project poster for class about Ruby Bridges and Supreme Court Justice Thurgood Marshall. Brennan, an animal lover, enjoyed sketching an alligator for an art project. The inspiration for his drawing? Ms. Jones taught class from her mother’s house in Florida, where baby alligators were frequent guests in the backyard! “We did a unit on the difference between Florida and New Jersey wildlife—so we toured the backyard,” said Ms. Jones, who said the project was a hit with her students.

Even during the pandemic, KIPP Seek Academy families continue to tune into Seek Speaks TV when they want to know what’s new at their school and in the world. The brainchild of teacher Sabine Vilsaint, this twice a week video series offers families updates on everything from the weather to current events like the 2020 election. Vilsaint reports that the best shows are the ones where students take ownership of the show and make script edits.

Arts-based electives have also shone at KIPP High School, as the school navigates its first year remotely while keeping its commitment to offering community-based electives. This year, students enrolled in the school’s photography program have worked closely with local Camden artist and activist Erik James Montgomery, who is teaching students the basics of photography after school on Zoom and plans to include their work in an upcoming exhibit. Student-photographer Danaijah Wilson said, “I’m inspired by the beauty of the world around me and I wanted to capture those images, so I started taking photos!”

According to ELA teacher and extracurricular coordinator Ken O’Kane, it’s particularly valuable for students to engage with their community when they explore new interests and pursue their passions. “Community connections help students retell the narrative of Camden and visualize possibilities for their futures,” said O’Kane.

← “History is Now:” A Day in the Life of Remote Teaching With Ms. Cabrera
What’s New in Newark? These Three Schools! →